(MY LIFE) 5 Superstar Crushes I Had as a Child

Oh, the good old days. Young, care free, and developing crushes on every teeny bopper celebrity that hit the pages of Teen Bop Magazine…What a life it was!
I thought it would be fun to compile a list of 5 young celebrities that at one point or another, I claimed were my soul mate. The list is in no particular order.

1. The kid from the television show, "Home Improvement" a.k.a Jonathan Taylor Thomas...Me and one of my girl friends used to send him love letters in the mail.. and no, he never replied to our marriage proposals. Hey, don't laugh. Mushroom cuts were the shit  totally rockin' back in the day! 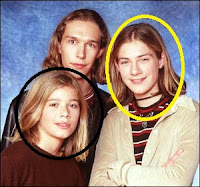 2. Zach Hanson from the band, "The Hanson Brothers". The black circle is around Zach, and the yellow is around Taylor. My sister was a fan of Taylor, she loved his rose coloured cheeks. They were always super red, but you just cannot see it in this edited photo. Why I liked Zach, I have no idea. Maybe because his hair was the longest? Meh. 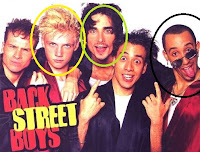 3. EVERYONE had a favourite Backstreet Boy. If you try and say you didn't, you're lying. My favourite, circled in black, was A.J McLean. I'm not sure why I chose the one who kinda looked looked like he was constantly on acid, but I did. The yellow circled, Nick Carter, was my sister's favourite.. and the lime green circle, Kevin Richardson, was my mother's. Yep, even my mom had a favourite. 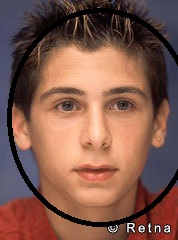 4. Justin Berfield, the kid from Malcom in the Middle. Yeah, I'm kind of embarrassed but this was when I was in grade 7 (13 years old). Me and my friend at the time tried looking up his phone number (he lived in California), and we were working in our school's office during lunch because we were nerds like that... wait, there's a rebelious aspect to this story.. We tried calling from the school's office phone. Wonder if they ever noticed the phone bill jacking... Hm..Oh, another funny aspect to this crush: my friend and I tried planning a trip to go to California with hopes to meet him. 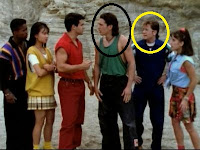 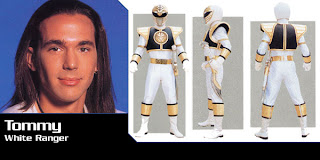 5. I saved the absolute best for last... THE WHITE POWER RANGER. Yeah, something about his long flowing hair and spandex body suit most have done it for me back in the day. I have no idea what the actor’s real name is. Never have, and most likely, never will. I tried searching it for this post, but cannot find it. My sister was a fan of the blue power ranger (circled in yellow). The blue ranger has recently come out of the closet as a homosexual. Guess my sister won't be marrying him now..
So who was/were your childhood crush(es)? Don’t be embarrassed; I want to know!
Posted by Belinda at 4:55 PM